It's not the journey, it's the desperation.
The first film in the Trilogy of Recovery Series, Bed Ridden offers counselors, facilitators and therapists the powerful medium of entertainment education, a leading-edge tool to help clients and patients address the chemical dependency disorders that negatively impact their lives. 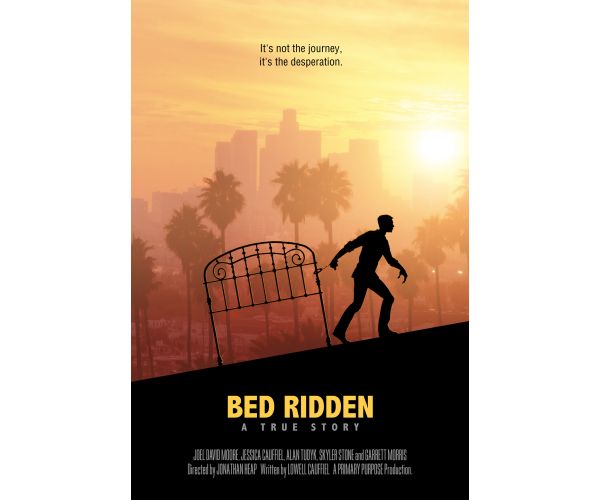 The absurd lengths people go to in pursuit of their addictions before they finally seek help are well known in recovery circles. Based on a true story, Bed Ridden chronicles the last score of a young addict and alcoholic named "Jay," who decides he can still navigate the streets of Los Angeles despite the fact a loved one has handcuffed him to his bed to stop him from using drugs. The film stars Joel David Moore and a cast of accomplished comedic players who include Jessica Cauffiel, Alan Tudyk, Skyler Stone and Garrett Morris.

Directed by Oscar-nominated filmmaker Jonathan Heap and written by New York Times best-selling author and screenwriter Lowell Cauffiel, Bed Ridden probes both the comedic and poignant sides of an addict’s obsession and its impact on the people he knows and loves. Ultimately, Bed Ridden points to the path of recovery from a disease that affects four in ten American families, according to the National Institutes of Health.

In film form, entertainment education harnesses the power of a story well told.

Social scientists at the University of Southern California and other institutions have identified the viewer's cognitive process watching a good story as "narrative transportation."  When a viewer becomes engrossed in a tale, he or she loses his sense of self and becomes immersed in that world and its characters.  This then can affect their real-world beliefs.  Often it causes them to focus on the connections of the characters and the story to their own lives.  Often they initiate action they may not have done had they not been exposed to the story.

Bed Ridden is the first of the three stories in the Trilogy of Recovery Series which correspond with the first three steps of Alcoholics Anonymous, and also used in other Twelve Step programs like Narcotics Anonymous.  Bed Ridden is about the Step One  journey to admit powerlessness over addiction.  Men In A Box is about Step Two insanity and what's needed to overcome it.  Plan B is about the Third Step decision to live life on life's terms.

Would you like to stream your free preview? Give us a call and we'll tell you how.