Be the first to review this product
Special Price $149.00 Regular Price $249.00
SKU
0650DVD
Add to Wish List
This video offers a gut-wrenching view of what happens to those who experiment with bath salts. Viewers will learn about the history and continued evolution of bath salts, and will recognize that these drugs are not only dangerous on a short-term basis, but because they are completely unstudied, they may also cause longterm damage to users’ health and mental states
Skip to the end of the images gallery 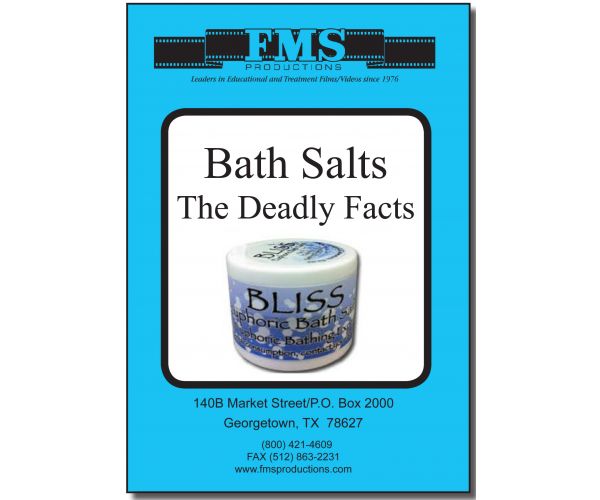 Most teens already know about the dangers of drugs like marijuana or cocaine. But in recent years, a brand new class of hazardous drugs is finding its way into the hands of curious teens. “Designer drugs” are synthetically developed to be “look-alikes” to illegal drugs—causing a similar high but chemically manipulated so that none of their psychoactive ingredients are illegal. Bath salts are a prime example. Made from a variety of synthetic stimulants, bath salts are more potent than cocaine, methamphetamine or Ecstasy. Currently they are legally sold in gas stations, convenience stores, tobacco shops as well as on the Internet. However, in September 2011, the DEA issued a temporary emergency ban which will likely result in bath salts being permanently banned in the future.

Hospitals and emergency hotlines have reported a dramatic increase in emergency calls related to bath salts. According to the American Association of Poison Control Centers, in the first eight months of 2011, 4,720 bath salts emergency calls were made to poison control centers across the nation—a staggering increase from the total number of bath salts calls (303) that were made during all of 2010.

The most common psychoactive ingredients in bath salts are mephedrone, methylone and 3,4 methylenedioxypyrovalerone (MDPV), three incredibly addictive synthetic stimulants that can cause psychosis and panic attacks in users, according to the DEA Office of Diversion Control. It is illegal to sell MDPV and mephedrone for human consumption—but since bath salts are marked with a deceiving label, the manufacturers are able to side step this law. State and federal officials continue to scramble to determine the best way to stop this outbreak of bath salts overdoses; it is expected that these synthetic stimulants will eventually be made illegal, permanently.